Make 2022 the year you finally hit your goals

This Vision Board Kit Will Keep You Motivated All Year Long... 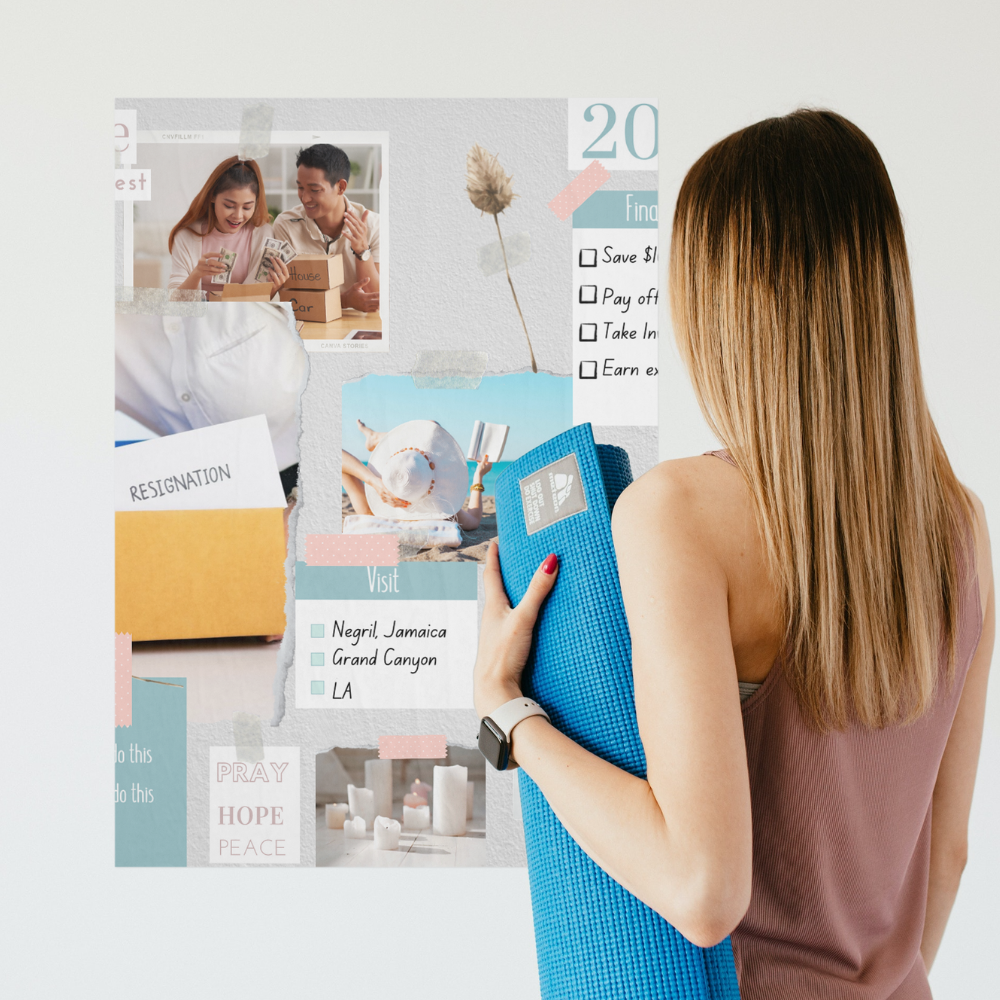 Do you believe somewhere deep in your heart that there’s a purpose for your life?

I do. I believe you were created to do big, bold, amazing things.

And the fact that you’re here, reading this, means that you probably believe that too.

But the question is - how do you turn that belief into real results?

I’m going to tell you the answer, but first, a quick story.

Did you know that before Jim Carrey was ever famous, he wrote himself a $10 Million check and stuck it in his wallet?

He dated that check for Thanksgiving 1995.

Carrey was dead broke at the time, but he didn’t let that stop him from obsessively visualizing himself as a successful actor.

And you know what?

Just before Thanksgiving of 1995 he found out he was getting paid $10 Million for his role in Dumb and Dumber.

Coincidence? Not. At. All.

Jim had 3 things that took him from the shadows to stardom.

A vision. A plan. Consistent Action.

These are the same 3 things that will help you make 2022 the best year you’ve had in a long time.

Again, the fact that you’re here let’s me know that you’re ready to turn your dreams into reality.

You refuse to be counted with the whopping 72% of adults who regret not pursuing their dreams.

And I've got just the thing to help you. 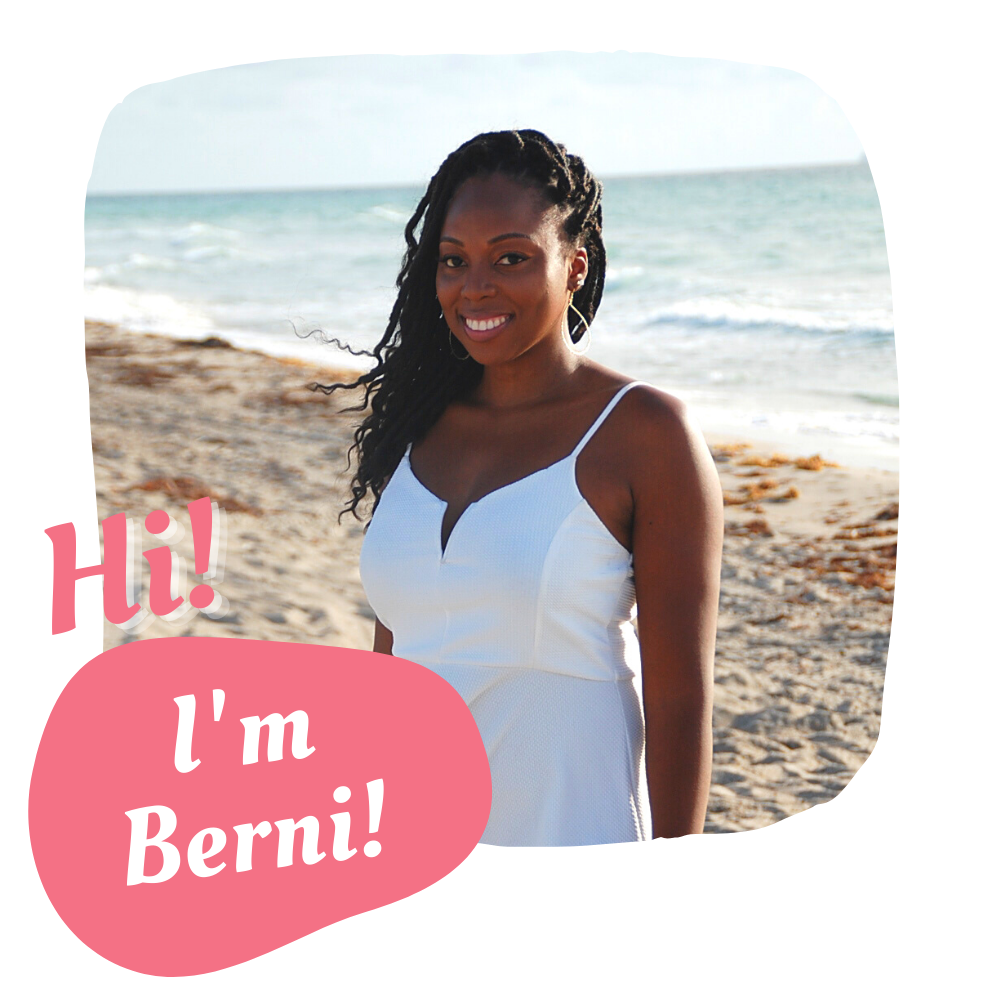 Hi, my name is Bernadette! I'm a wife, mom, and blogger who, like you, has big dreams. But there have been way too many times when I got really fired up about my dreams, only to get sidetracked and lose motivation and focus just a few months later.

Has that ever happened to you?

If you answered “yes,” I have just the thing for you.

You and I both know there’s nothing more frustrating than looking back at the last few months, or maybe even years, and realizing you still haven’t accomplished so many of your goals.

I want to give you what you’ll need to create a vision board, so beautiful you’ll eagerly look at it daily. It’ll help make visualizing your future easy and keep you focused on your goals consistently. It’ll inspire you to take the kind of action that brings the results you’ve been craving.

Even if you've tried using vision boards before, I'm confident that this Vision Board Kit will help you get more clear, focused, and motivated than you've felt in a long time.

I call it, "Your Dreamiest Year Ever" Vision Board Printable Pack

I made these Vision Board Printables for people who want to do big things and become the best version of themselves.

If that’s you, you’re going to love this. So forget about frantically searching through magazines for images and inspiration - i’ll show you the simpler way. 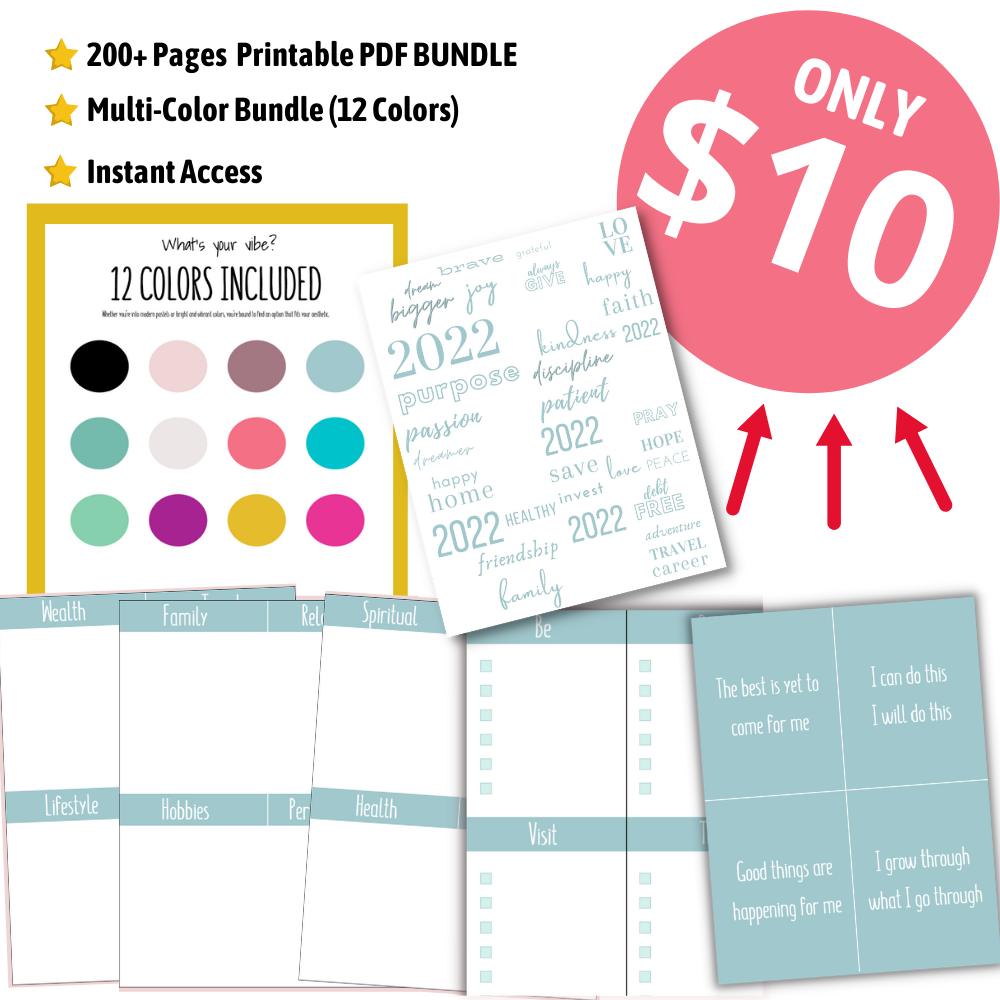 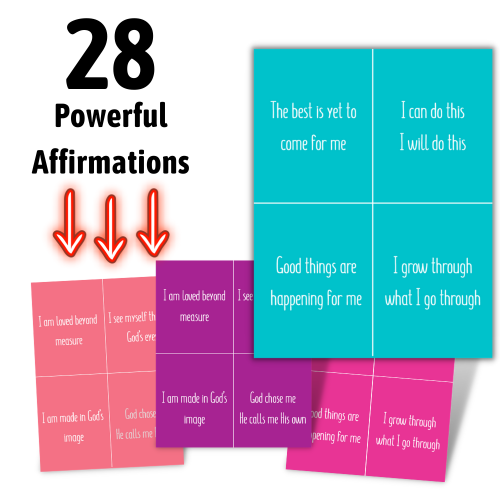 Ditch the negativity and give your confidence the boost it needs!

Say these affirmations daily to get into a powerful mindset that will keep you focused, encouraged, and committed to crushing your goals.

Use these affirmations to coach yourself daily, and you’ll be less likely to throw in the towel on your goals. 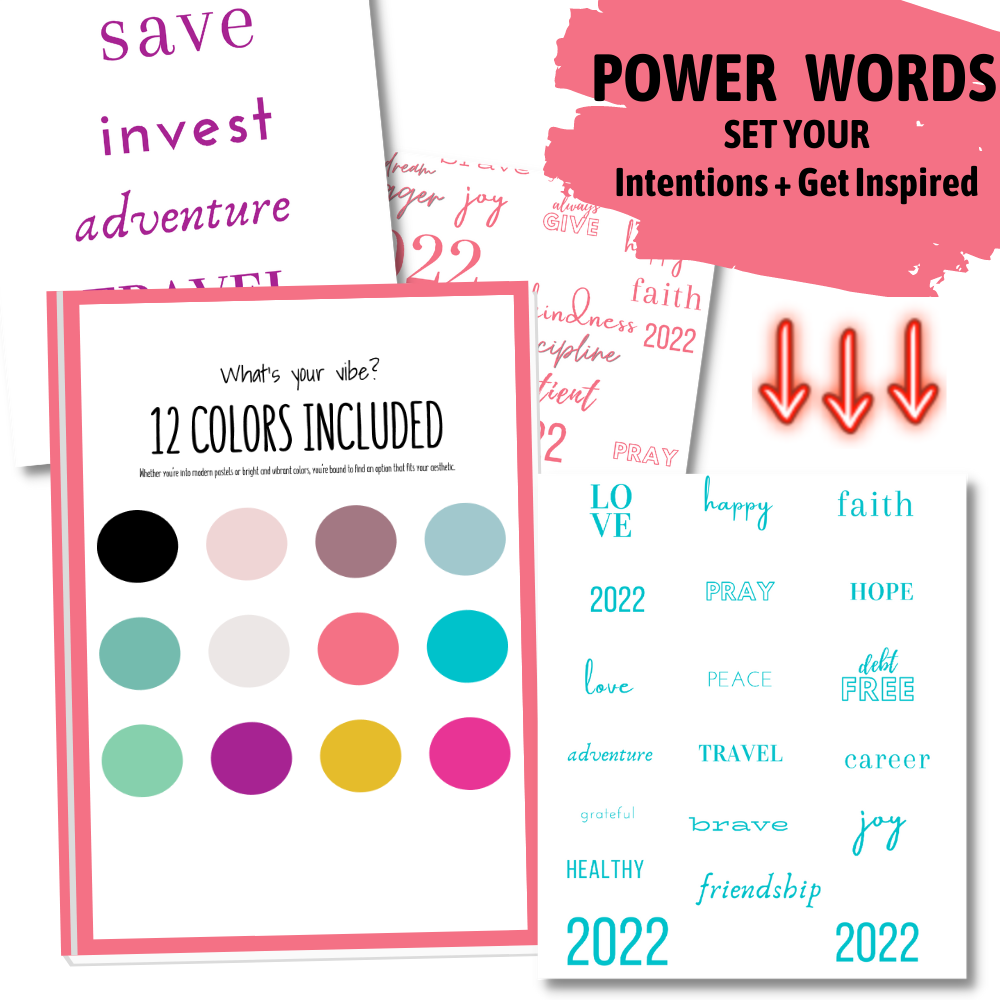 How do you want to feel?

What do you want to do and experience?

How do you want to show up in the world?

Whatever your answers, your list of Power Words will help you set you bold intentions and get crazy inspired.

Add them to your vision board as powerful reminders of what to focus on daily. 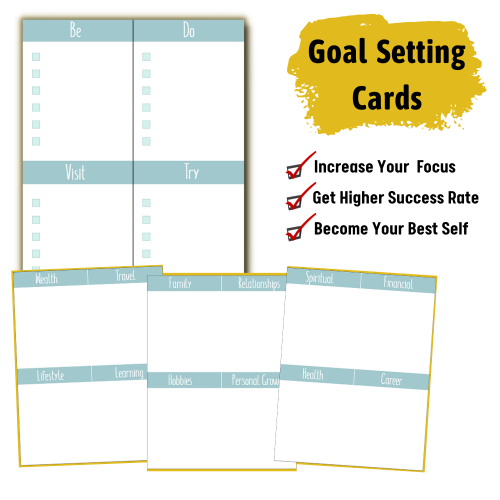 It’s time to get laser focused.

Turn the answers to that question into goals for each area of your life.

Write your goals, pin them to your vision board, and use them to guide you in making your daily to-do list.

And because you are a first-time customer, when you join iPhone Photography Mastery today, we will also throw in these additional bonuses at no additional charge. 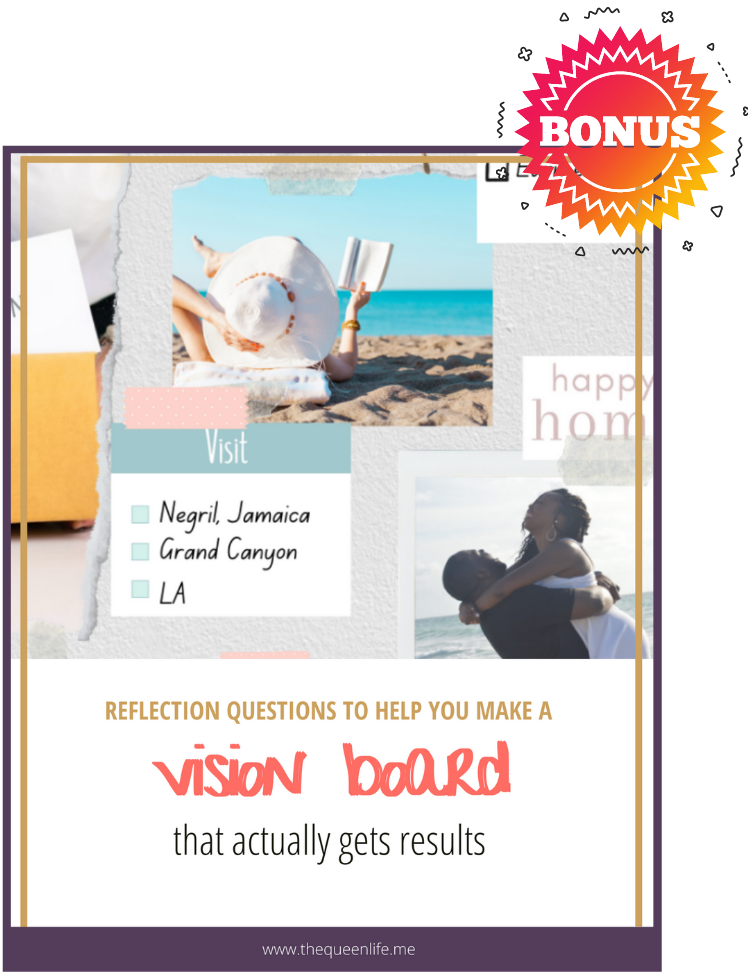 By the end of this 4 page Workbook, you’ll have much more clarity and a lot less overwhelm.

It’ll help you really pin point your deepest desires by showing you the key things to reflect on. 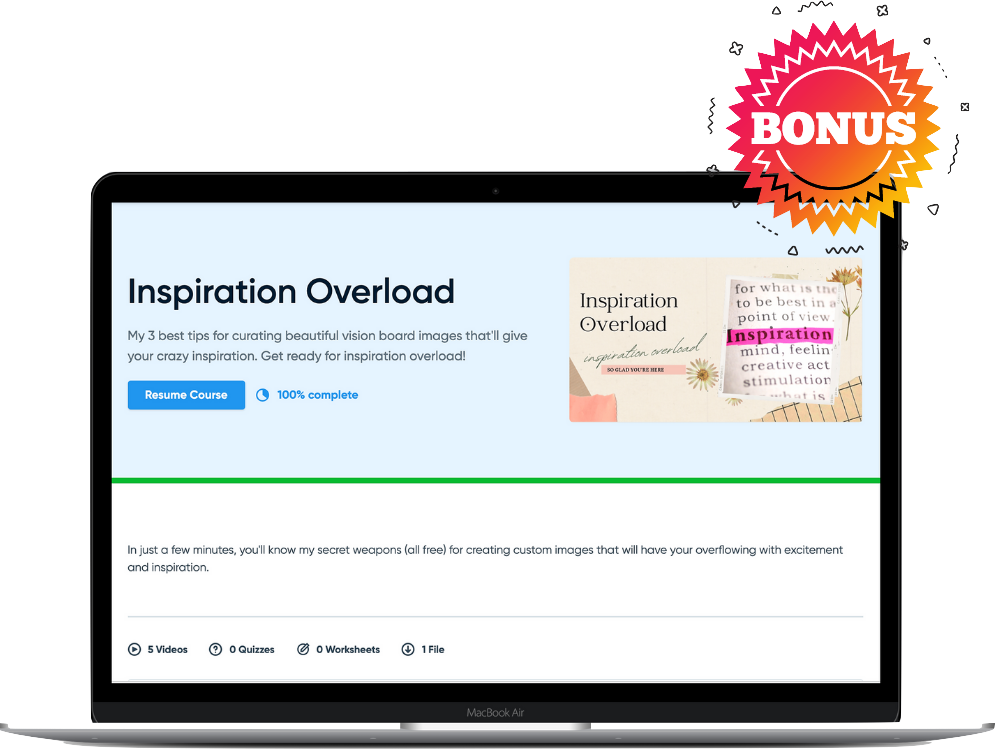 Learn the simple, but powerful mental training technique pro-athletes and successful people across various industries use to hit their goals consistently.

Plus you'll learn how to combine that technique with your vision board for extra powerful results.

I know you are going to absolutely fall in love with the printables you'll get in the Dreamiest Year Ever Printable Pack! In fact, you will be on your way to a beautiful vision board in 7 days, or I'll send back every penny you paid.

Get "Your Dreamiest Year Ever"